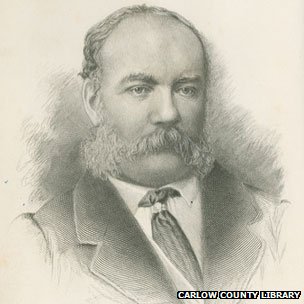 Born without arms or legs, Arthur MacMorrough Kavanagh was an adventurer who rose to become a successful politician. Widely revered as a prodigy, he was also part of a rich and powerful family, writes Nicholas Whyte.

He was the heir to the ancient kings of Leinster. He was a horseback messenger for the East India Company in the 1850s. He wrote a book about hunting and painting on the borderlands between Greece and Albania.

END_OF_DOCUMENT_TOKEN_TO_BE_REPLACED

A Response To The Removal Of TheFlag

THEREBY RAISING FOR US A BATTLE STANDARD, WHICH WILL RALLY AND UNITE THE LOYALIST WORKING CLASS.

Last week the no doubt sincere yet totally naive, peace at any price Alliance members on Belfast City Council, allowed themselves to be misused by the IRA to defy the democratic will of the vast majority of the people of Northern Ireland, by the lowering of the National Flag of Northern Ireland at Belfast City Hall.     Yet again the Alliance party has fallen for the age old IRA tactic of, demanding the totally unachievable, safe in the knowledge that the head in the sand Alliance Party would propose a nearly unachievable IRA  wish, as a peace at any price compromise.     This time I think we can safely predict that the Alliance party fence straddlers,  have finally managed to castrate themselves.    I have absolutely no doubt that  they will lose the East Belfast seat at the next Westminster Election, their present sitting MP Naomi Long, only managed to secure the seat at the last election, because of a protest vote by the Loyalist Working Class, against the antics of Swish Family Robinson.    Thanks to the treachery of the Alliance party at the City hall, and the treachery of the never, never, never, DUP up at Stormont, where the National Flag of Northern Ireland can also only be flown on designated days with IRA permission, the Loyalist Working Class are now united under the same Battle Standard that United us during the Ulster Workers Strike of 1974.   This time,  let us retain and use that unity and power for the good of the United Loyalist Working Class.