The summer of 1977 was unforgettable. At least for a teenager who was embarking on his life sentence.  All the talk was of Paisleys rerun of the 1974 strike This time things would be different. There was not the same mood or drive in ‘77. It was not unexpected for 4 o clock knock as the security forces took a different line and many of the suspected paramilitaries should spend a while in the Crum that year.  Up to June  that year a grand total of 1000 men wandered (handcuffed) through the Crum’s doors.  I went to C wing where I had stayed for a while in 1974. This was totally different. Special category status had been stopped in 1976. And now the boot was on the other foot. C wing used to be loyalist,  now it was mixed; republican and loyalist. There was an arrangement between the two factions. Day in; day out. Day out was out in the morning for a wash. Out for hour in yard in the  afternoon. And an hour later in the evening,  either  TV room or the yard. The rest had the 24 hour lock up.

The longest day of my stay started off with loyalists on a day in.  We could hear the usual cacophony of noise outside on the landings as the republicans went about their day out. However there was a change in the atmosphere. Something was different.  I had a penthouse suite in the east side of  C wing overlooking the C wing dining hall. (Now gone if you visit the Crum. ) Things started to get lashed out of the windows onto the rec room roof. We were used to mystery parcels but this was different. Amazing just how much contraband there was. The new steel  doors were totally unlike the old doors I recalled from my stint in 1974. Once the door flap was down you only had the thinnest  of a slit between door and frame to look out.  I was kneeling looking out and could see no prisoners or the usual screws. Instead I spied an army uniform.

The army belonged outside on the external walls. Definitely something was up. The shouting started. This was a major search not the usual turnover.  We became aware that people were being taken from their cells. Doors clanged, keys jangled.  Cat calling started to reduce. Soon our turn came.  ‘You 3.  down to the toilets’. That way’ .  I walked out onto the landing.  The place was a mess on the 1s (bottom floor). Army uniforms and then surprisingly I seen a detective from the A squad.  One army guy had a black Labrador on a lead which was running about with tail wagging as if on a great adventure.

It turned out that all the loyalists were in one toilet at the end of the wing while all republicans were taken to the toilet at the other end. And so started a long day. At first it was a change to routine so there was a buzz and a laugh. As the day dragged on tempers would begin to shorten and the fun mood died off. Of course there was no chairs

Of course,  that amount of men  (maybe 30?) for that length of time, and  in a very small space the inevitable would have to take place.  Taking a piss was easy enough but soon someone needed a carp. (He was dyslexic). Nerves,  plus poor food and  little exercise made for poor digestion. Of course the poor  bonzo who needed to go would have the worst guts in the wing. Did I mention the toilets themselves had no doors?   So with a captive audience this poor sod had to answer the call of nature. And oh no,  it couldn’t be a gentle plop and splash,  more a squish and squirt. There was an instant fight to get nearest to the only window.   Any amount of cursing could not reduce the aroma. An argument started as to whether the guy had dysentery.  Some discussed punching a screw and getting taken to the boards. Anywhere but here. We started asking who this guy’s cell mates where. We commiserated with them.

The wrecking continued outside.  We wondered when, or if,  we would get back to our cells. Soon we were allowed back. The cell was a mess. It was as if a giant took hold of the cell and shook it. The beds had been taken apart literally. The mattresses were on the floor,  the sheets flung around the cell. Food was strewn on the floor, clothes were scattered, books tossed all over the place.  It took us some time to get a semblance of order back.

And so order and routine came back slowly.  Nothing of import was found. Sometime after I left the Crum, to go to the Kesh,  a news report said a bomb had gone off in a cell in C wing? 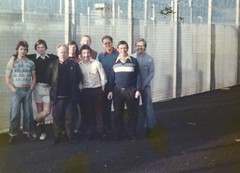 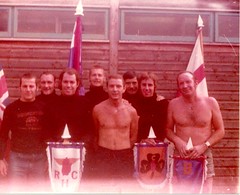 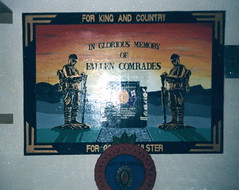 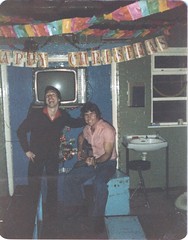 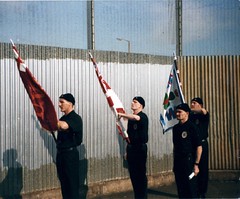 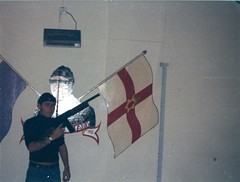